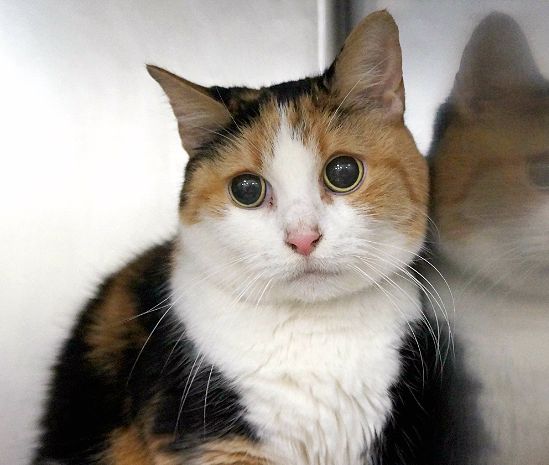 ***SAFE 10/17/17*** PRETTY PRINCESS HAD SOME LITTERBOX ISSUES AND WAS NOT EATING SO OWNER TAKES HER TO THE KILL SHELTER INSTEAD OF A VET!! Princess is a senior girl and was starting to have litterbox issues but when she stopped eating, her owner should have taken her to the vet – but instead this poor senior girl was dumped at the shelter. She was not feeling well and should have a follow up vet check. Princess is friendly but shy and needs some TLC and love. Give this girl a home and the care she needs. RESERVE SENIOR GIRL PRINCESS BY NOON!!

Hello, my name is Princess. My animal id is #9152. I am a desexed female calico cat at the Manhattan Animal Care Center. The shelter thinks i am about 10 years old. – P

My medical notes are…

Details on my behavior are…

Animal Behavior Saved At: 10-Oct-2017 16:19:19.000 Animal ID: 9152 Animal Name: Princess Age: 10 Years (approx) Tag Number: Breed: Domestic Short Hair Gender: Female Spayed / Neutered: Yes Handler: Observer: Behavior Assessment Date: 10/10/2017 Retest Date: Retest Reason: Next Test Date: KNOWN HISTORY: Princess was brought in with limited information on their behavioral history or tendencies in a home environment. MEDICAL BEHAVIOR: Subjective: BAR, friendly ENRICHMENT NOTES: 10/8/17 Resting in middle of cage, soft posture, a bit wide-eyed. Lay in place when door opened. Allowed and slightly leaned into pets, continued to look around. Seems a little wary, uncomfortable with surroundings. 10/9/17 Curled up at back, wide-eyed, seems anxious. Became alert when door opened, started looking around, very quiet meow-whining. Sniffed assess-a-hand, tolerated pets. Curled up tighter and started lip licking when startled by room noise. Softened slightly after a little while, but remained alert. Showed no interest in treats or wet food. Cage Condition: No change Reaction to assessor: Princess remains tense, crouched position at the back with head up. Reaction when softly spoken to: Princess remains alert with eyes wide open, ears erect and forward. Reaction to cage door opening: Princess remains in place, eyes wandering towards sudden noises. Reaction to touch: Princess slowly leans into the assessor’s hand and warms up, even more after a few strokes and began to stretch out comfortably while purring. However, she remains cautious with her surroundings and went back towards her original pose and stiffens up in place. ACTIVITY LEVEL: Laid back VOCAL: Quiet CHARACTER TYPE: Curious Timid Independent BEHAVIOR DETERMINATION: Experience Behavior Asilomar TM – Treatable-Manageable BEHAVIOR SUMMARY: Princess tolerates attention and petting but may be fearful or stressed in the shelter. She may have some behavioral issues that will need to be addressed in the home. We recommend that this cat go to a home with experienced cat parents. Recommendations Adoption Recommendations: Comments: Suitability With Children: Other: Experience Yard Size: Overall Rating: Passed For Rehoming: Indemnity/Waiver: Adoption Summary: Color Match: Profile/Activity Level:

For more information on adopting from the NYC AC&C, or to find a rescue to assist, please read the following: http://urgentpodr.org/adoption-info-and-list-of-rescues. If you are local to the Tri-State, New England, and the general Northeast United States area, and you are SERIOUS about adopting or fostering one of the animals at NYC ACC, please read our MUST READ section for instructions, or email [email protected] Our experienced volunteers will do their best to guide you through the process. * We highly discourage everyone from trusting strangers that send them Facebook messages, offering help, for it has ended in truly tragic events.* For more info on behavior codes and ratings, please click here: http://information.urgentpodr.org/acc-placement-status-descriptions. For answers to Frequently Asked Questions, please see: http://information.urgentpodr.org/category/frequently-asked-questions/. You can call (212) 788-4000 for automated instructions.

Help us keep our cats safe, and keep our threads open to public comment, by encouraging interested parties to reach out to our HELP DESK. All other inquiries should be directed to the Contact Us at the bottom of the page.