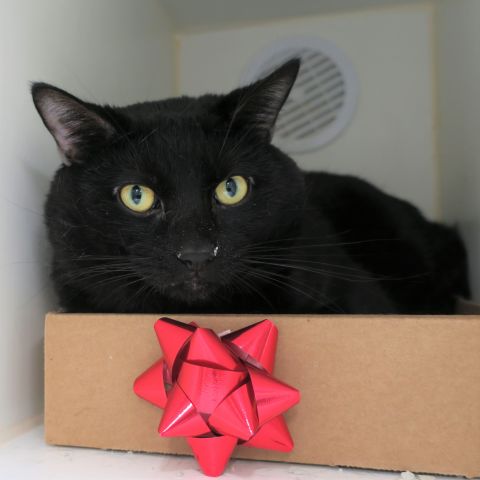 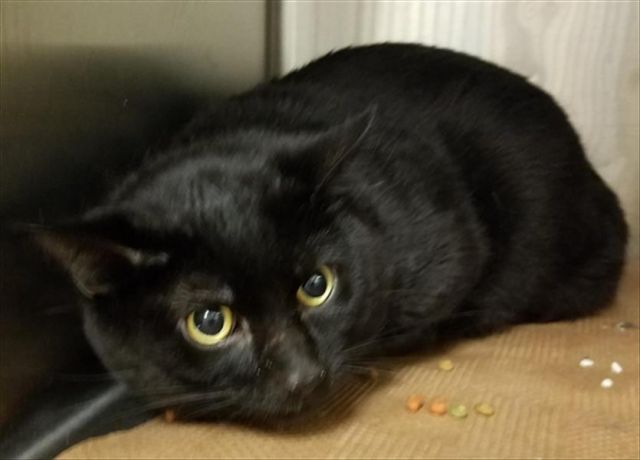 *** SAFE 01/02/18 *** MIDNIGHT HAS A VIDEO! Panther boy Midnight is ready for the holidays @MACC — MIDNIGHT is a healthy cat who is a bit of a chunky monkey. He is about 4 yrs old and needs a furever home.

Hello, my name is Midnight. My animal id is #16173. I am a male black cat at the Manhattan Animal Care Center. The shelter thinks I am about 4 years 1 weeks old. – P

Midnight is at risk for medical reasons, having been diagnosed with Upper Respiratory Infection, which is contagious to other cats. Behaviorally, we recommend that Desmond would be best suited to a cat experienced home.

My medical notes are…

Hx: Obese. Reported sneezing yesterday. S: Alert, quiet in kennel O: Sneezing A: URI P: Move to isolation. Antibiotics not indicated at this time due to likely viral cause. Supportive care as necessary. 1088

Details on my behavior are…

Upon intake, Midnight was tense but would allow to be pet on the head. Midnight would lick his lips when I pet him. Midnight allowed me to collar him inside his carrier but would not allow me to take him out. Midnight did not want to come out on his own, but once I placed the carrier inside the kennel he came out on his own and stayed in the back of the kennel.

Is this cat having litter box issues?: Yes

Basic Information:: Midnight is a male black domestic short haired cat. Midnight was left with a caretaker for two weeks before being surrendered by the caretaker because Midnight’s owner did not return and she could no longer take care of him. Midnight has no injuries or health problems and has not been taken to the vet recently.

How is this cat around children?: Midnight has not interacted with children.

How is this cat around other cats?: Midnight has not interacted with other cats.

How is this cat around dogs?: Midnight previously lived with a small breed dog. Midnight would sniff the dog but would walk away and no further interaction would occur.

Behavior Notes: During car rides, Midnight is relaxed or sleeping. Caretaker has never tried to bathe him, trim his nails, or brush his coat. Midnight will swat when someone picks him up or holds him and his will scratch when being put into a carrier. Midnight has never been disturbed as he sleeps or rests.

Bite history:: Midnight has never bitten another animal or human.

Has this cat ever had any medical issues?: No

For a New Family to Know: Midnight is a shy and fearful cat. Midnight will follow you around for food but will mainly stay on the window sill or lay on the couch. Midnight was kept as an indoors only cat and was free-fed dry food. Midnight would have litter box accidents almost every day and he would poop inside the bath tub even if the litter box was clean. Midnight had a scratching post made of fake grass but would not use it and instead would scratch on furniture.

ENRICHMENT NOTES:: 12/19/17 [Clicker training] Midnight keeps a low body posture and looks around with wide eyes, alert. Lowers his head and lip licks when door opens. Was hesitant to lick tuna puree from my hand, but licks it when placed on the ground. Rewarded him whenever he allowed me to pet him. He was hesitant initially, but slowly starts to warm up and lean in for pets. Has potential to improve, but needs more positive reinforcement. 12/21/17 [Clicker training] Sleeping originally, but woke and looked around with wide eyes, focused on surroundings. He is very interested in tuna and will lean forward to sniff tuna. Still a bit hesitant of touch, but stays in place and allows petting, mostly indifferent initially. Starts to lean in for cheek rubs after and lifts his rear when stroked along his body. Still a bit tense, but is improving.

Reaction to assessor:: Midnight was lying down in his cubby, looking around with wide eyes.

Reaction when softly spoken to:: Midnight lowers his head and lip licks, alert.

Reaction to cage door opening:: Midnight remains motionless and focuses on the assessor.

Reaction to touch:: Midnight sniffs the assessor’s hand and was hesitant of touch, lowering his head and tilting his ears, but he accepts petting with a slow approach and starts to warm up. He leans in for cheek rubs and closes his eyes. He watches the assessor’s hand when pet along his body, but will slowly lift his rear.

Potential challenges comments:: Midnight’s previous caretaker report that he would defecate outside the litter box inside the bathtub. We are unaware of what, if any, modifications steps were taken to try and address this behavior in the home, so we cannot be sure what the trigger may have been or if this behavior may continue in a future home. However, we recommend that potential adopters be comfortable with management and modification techniques for elimination outside the litter box should this behavior continue in a home environment.

BEHAVIOR SUMMARY:: Midnight accepts attention and petting but may be fearful or stressed in the shelter. He may need time to warm up to his new home and family. We recommend that this cat go to a home with experienced cat parents.

For more information on adopting from the NYC AC&C, or to find a rescue to assist, please read the following: http://urgentpodr.org/adoption-info-and-list-of-rescues. If you are local to the Tri-State, New England, and the general Northeast United States area, and you are SERIOUS about adopting or fostering one of the animals at NYC ACC, please read our MUST READ section for instructions, or email [email protected] Our experienced volunteers will do their best to guide you through the process. * We highly discourage everyone from trusting strangers that send them Facebook messages, offering help, for it has ended in truly tragic events.* For more info on behavior codes and ratings, please click here: http://information.urgentpodr.org/acc-placement-status-descriptions. For answers to Frequently Asked Questions, please see: http://information.urgentpodr.org/category/frequently-asked-questions/. You can call (212) 788-4000 for automated instructions.

Help us keep our cats safe, and keep our threads open to public comment, by encouraging interested parties to reach out to our HELP DESK. All other inquiries should be directed to the Contact Us at the bottom of the page.